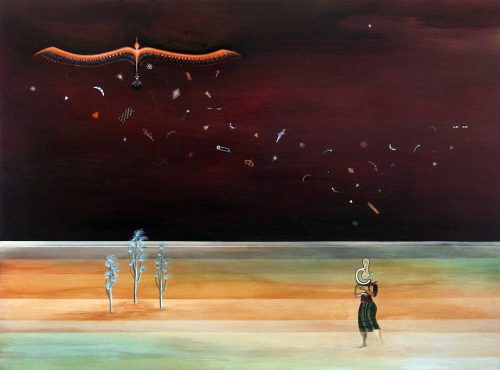 A milestone, mid-career exhibition showcasing a selection of over 30 works from Andrea’s impressive 20-year career, alongside a new body of work created especially for this exhibition.

Born in Whangārei, Andrea is staunchly aligned with both her Māori and Pākehā lineage, having an arguably extensive knowledge of both histories. She was tutored and mentored by some of the great Māori art educators and artists of our time, including Manos Nathan (1948-2015), Colleen Waata Urlich (1939-2015) and Sandy Adsett (1939-).

“I’m not a spokesperson for the entire Māori culture. No-one is. Beware of anyone who claims they are. I’ve been cornered into speaking for ‘my people’ too many times to count.”

Andrea started her training at Northland Polytechnic, in Whangārei. After a car accident disrupted her study, Manos Nathan encouraged her attend Toihoukura Art School, in Gisborne. There, under the guidance of master colourist Sandy Adsett, Andrea graduated and entertained the possibility of painting as a full-time practice. Not long after, she was ‘found’ at Toimairangi School of Māori Visual Art by Kevyn Male, and went on to be represented by SOCA Gallery in Auckland where her career progressed on both the national and international stage.