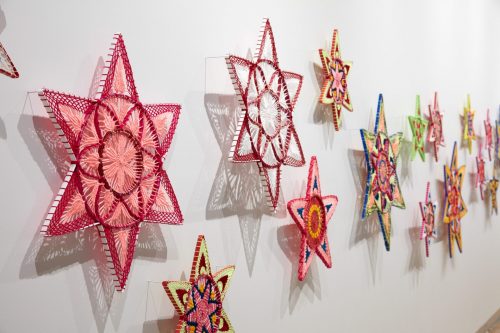 Fafetu is a major exhibition of work by Tuvaluan master artist Lakiloko Keakea, including 40 new works made between 2016-2018.

This is the first major solo exhibition of Lakiloko’s work building on a practice of over five decades and is accompanied by a number of papa (plain mats) created by West Auckland based women’s group Fafine Niutao i Aotearoa of which Lakiloko is a member of.

Fafetu highlights and celebrates artforms that are valued and used within the living Tuvalu communities and cultural contexts in Aotearoa; but also creates an awareness and understanding of who Lakiloko and Fafine Niutao i Aotearoa are; and of the significant role these women play as makers maintaining a strong connection to their heritage and homeland through their artforms of kolose and weaving. It also seeks to revitalise and strengthen the transmission of the knowledge and making practices of these art forms for younger generations of Tuvalu women in Aotearoa. 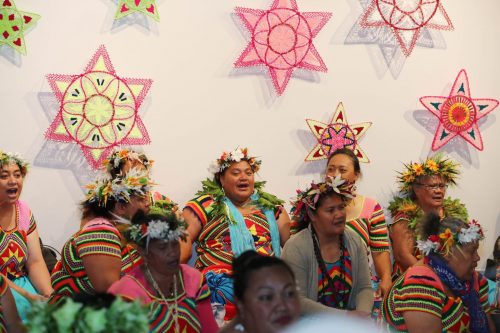 Lakiloko Keakea’s fafetu are kaleidoscopic –mesmerising, brightly-lit, and filled with an array of extraordinary patterns. These works have been created using a mix of manufactured and natural materials including wool, synthetic ribbon, cloth ribbon, and plastic cargo ties. While Lakiloko takes a six or seven pointed star as her frame again and again, no two pieces are identical –their interiors are each intricately singular and individual.

Fafetu is curated by Malama T-Pole, she is an advocate for Tuvalu art forms and a member of the Niutao Community Trust. The touring exhibition is presented by Objectspace, Auckland. 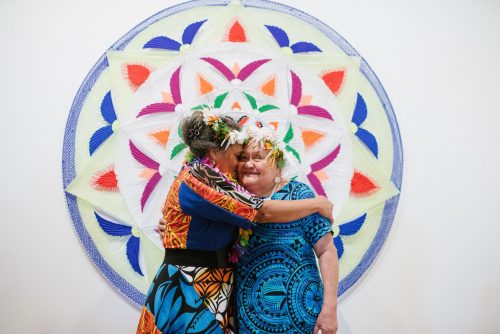 Lakiloko Keakea was born on Nui Island, Tuvalu, in 1949. She is an artist of mea taulima; things created with hands.

In 1957 Lakiloko moved to Niutao Island, and here began to practice kolose. In the 1970’s Lakiloko joined a women’s arts group called Fakapotopotoga Fafine Tuvalu, which included women from all the atolls in Tuvalu, each sharing knowledge of the art practices distinct to their island. During the 70’s several women from the collective travelled together to the Marshall Islands, returning with the star-shaped design used in fafetu. In 1996, Lakiloko moved to New Zealand –her art-making practice is now based at her home in Ranui, Auckland. Lakiloko is a key member of the Tuvalu Women’s arts collective Fafine Niutao I Aotearoa.

Lakiloko’s work has been exhibited at Auckland Art Gallery Toi o Tāmaki, in Home AKL: Artists of Pacific Heritage in Auckland,2012, and in Kolose: The Art of Tuvalu Crochet, at Māngere Arts Centre Ngā Tohu o Uenuku, 2014, Lake House Arts Centre, 2014, and Pātaka Art & Museum, 2017. Lakiloko’s work, Fafetu, 2012, is on display as part of the Seeing Moana Oceania exhibition (June 2018 –December 2019) at Auckland Art Gallery Toi o Tāmaki. Her more than fifty years of knowledge and experience as a maker, and her significant contribution to maintaining Tuvalu art in Aotearoa, was acknowledged by Creative New Zealand in 2017 when she was awarded the Pacific Heritage Art Award.