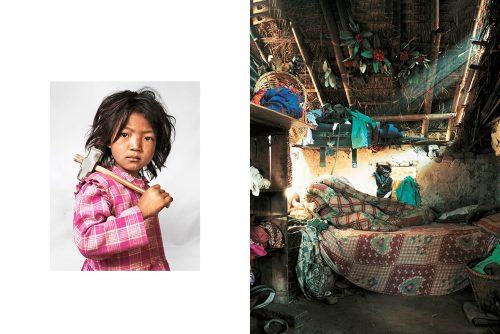 The diverse living situations of children across the globe are highlighted in a ground-breaking project by international Kenyan-born, Italy-based photographer James Mollison featuring candid images of children in the places where they sleep. Mollison says ‘The project became a vehicle to think about poverty and wealth, about the relationship of children to their possessions, and the power of children – or lack of it – to make decisions about their lives.’ Where Children Sleep comprises 25 images and moves from the stone quarries of Nepal to provincial China and downtown New York.

Toured and developed by Expressions Whirinaki

James Mollison was born in Kenya in 1973 and grew up in England. After studying Art and Design at Oxford Brookes University, and later film and photography at Newport School of Art and Design, he moved to Italy to work at Benetton’s creative lab, Fabrica.

Since August 2011 Mollison has been working as a creative editor on Colors Magazine with Patrick Waterhouse. In 2009 he won the Royal Photographic Society’s Vic Odden Award, for notable achievement in the art of photography by a British photographer aged 35 or under.

His work has been widely published throughout the world including by Colors, The New York Times Magazine, the Guardian magazine, The Paris Review, GQ, New York Magazine and Le Monde.