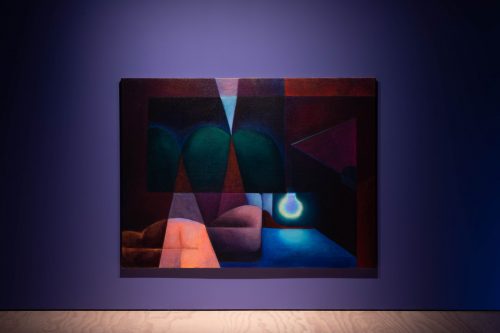 In these times, where the world seems anything but quiet and noise has seeped into every crevice like so much static, the lure of a quiet place—however we might imagine it—is a strong one. Imogen Taylor’s Quiet Motel speaks to this collective craving through a dead-of-night romance. There’s more to these paintings than escapism, though. Rendered in night-strokes, these images range from moonlit woods and hearth-glittered estuaries, merrily reflecting one lonesome resident, to fish-strewn bodies  reposing in release. These works utter the kinds of intimate whispers you’d need to be in a quiet place to hear—invitations to step outside the garishly over-lit and over-exposed confines of the tiresome known. They indulge the small, scintillating voice that only admits vulnerability in the infrequent breaths between battles, between meetings, between grocery runs and workdays and obligatory friendships that leave the subterranean well inside you gruesomely untouched. What do you really need?, Taylor asks disarmingly.  In Quiet Motel, Taylor’s characteristic blocks of colour take on a figurative lilt, recognisable forms emerging from various fogs; of lockdown, of depression, of the lorazepam you took to take the edge off of being so god-forsakenly heart-sore. Perhaps from the fog of hunger itself, which can distort reality into unholy semblances of the thing you didn’t know you were missing, cruelly offering an echo of the desired, but never the real in all its glorious thing-ness. No matter what specific thing fits your bill-of-orientation, history dictates that it’s unlikely you’ll find satisfaction.

There’s a petit distance between a quiet motel (and the proclivities it caters to) and the aged-out ruins of cruise clubs and sex-on-site venues, now hanging by a thread compared to their pre-AIDS, pre-Grindr heydays. It’s plausible that Taylor’s work alludes to this sort of hiding in plain sight, finding a place for forbidden fruits—less forbidden now—whose avowal might threaten livelihoods and sobrieties. Thus, the quiet motel. For many a practicality, for some a fetish, a place  to straddle two worlds on a tightly managed schedule, making space for dishes best served in the dark so they might be enjoyed alongside boiled potatoes and spinach. As in the last supper or the Eucharist, food plays a role in ritual communion, a corporeal exchange much like sex, or at least in gorgeous complicity with pleasure. The presence of food in Taylor’s multi-panelled tour of clandestine nocturnal delights makes perfect sense—the midnight snack, the fevered feast, stolen and squirrelled away in the magic circle of the quiet motel. The notion of a nocturnal pleasure implies something that needs cloaking from the prying eyes of the day-lit hours. The quiet motel is where such pleasures live, coming out at night to gather in the sacred seclusion of the in-between. 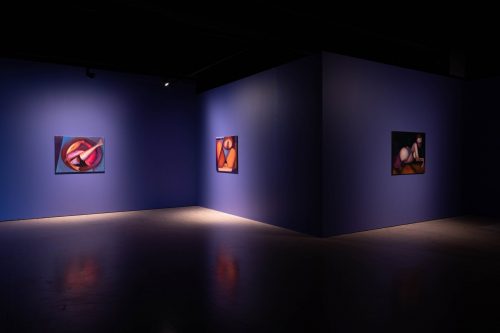 At the Buddhist temple on Tiger Mountain, they seasonally undertake a ritual eating that’s a symbolic cure for world hunger. The food is laid out in a holy space, everything curated and consecrated towards this living metaphor whereby those present meet the corporeality of the globe through a shared act of ritual intimacy. An incantation is recited, songs are sung while every participant, having fasted up to this point, sits around the spread issuing increasingly cacophonous belly-growls. Hunger looms and blooms into a meditative presence, a dinner guest in and of itself comprised of every individual’s longing for this admittedly fragrant but over-hyped meal. The group works to ritually rouse hunger’s distinct energy to a fevered pitch, collectively engaging in an act of edging, keeping themselves painfully close to the orgasmic release of the meal but being systematically denied it. Finally, this ritual’s consensus leader makes the call—the prayer sent out is gathering purpose in the spirit highways and executing their collective intention with omnipotent efficacy. Finally, the meal can begin, but in silence. Much as silence sustains the elicit magic of clandestine, fumbling sex you probably shouldn’t be having, the silent meal tastes profoundly better than anything you’ve ever eaten before.

There still remains the lure of somewhere quiet. A place outside the brutality of the living, even the most well-intentioned of whom carry within them like a bad seed a blood-rinsed evolutionary history. The quiet motel— a place to love and be loved, for what it’s worth. A roadstop, or maybe even a permanent vacation, if the mood sticks and neither party wants the honeymoon to end. Not unlike the quiet motel, the honeymoon offers somewhere to momentarily reside and pretend there’s nothing but the peachy archways of love and everything it alleges: the union as a fortress for two against naysaying entropy. A place where a previously cold body can enjoy the warmth of a honeymoon, giving in to the delusion of safety in a world where no such thing could ever exist. In the quiet of a secluded location, high on the fumes of each other’s love-stinky bodies and feeding each other various savoury bon-bons, it’s easy to maintain this illusion of love’s efficacy. A quiet motel, the in-between incarnate. A setting for the witching hours, a place to be spirited away to and kept for a time by the instinctual, by the spritely, by shades and an extensive pantheon of shadowy things born of thwarted desire. Every unsatisfied lust bears ephemeral fruit, in text and rhyme, like incubi and succubi and silver-tongued djinns. Or like Briar Rose, the sleeping beauty who slept through a century for lack of a suitor, for lack of the required thing-ness. If she’d just found a quiet place with a willing body and given herself over to an extended honeymoon, she mightn’t have gone to the grave in a musk of regret and unwashed bedding.

If there is such a thing as magic, it happens in the alone time. The witching hours happen around midnight, a liminal time betwixt two days: unlike the twenty-four-hour invitations to lewdness of quiet motels, effective sorcery is interned in a fixed etheric timeslot. Does the quiet motel, then, know something about esoteric systems, a humid secret forgotten amidst the embittered disenchantment of our world? What can these limnings give us, if heartily revisited, that an algorithm never will, or can? Perhaps the quiet motel, and other disappearing places of quiet like it, stand apart from the floods of positivising noise as shrines to an older way. A belligerent bending of natural law pours out from these urbane vacuums of modernity, uncanny motes as elusive as Higgs particles. At the bottom of the glass, birthed from swirling nothing, rest small and daily miracles. 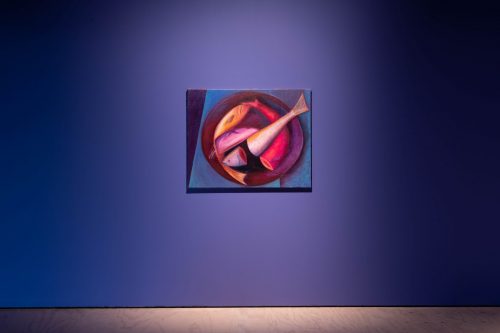 Taylor’s moon-drenched grove reeks of a sabbath, describing a different kind of isolation from that which has been peddled recently, namely an advisory strategy against a seemingly unstoppable pathogen. In Taylor’s eye, in the very vacuum in which these paintings were made, isolation can be transformative—outside the hallowed status of coupledom, it can preface a profound intimacy with the self. Lockdown narratives have revelled in bread recipes and hot-topic Netflix listings, radio-silent on the headier possibilities of extended solitude: psychosis, the unspooling of sanity and an about-face towards the icy promise of the void. In Taylor’s gilded quiet, solitude and confinement are alchemised into the stuff of rebirth and renewal. A sensory cocooning. A cosy darkness preparing the way for something better. Hopefully.

Born 1985, Whangarei. Lives and works in Auckland. Taylor graduated in 2007 from Elam School of Fine Arts, Auckland with a Bachelor of Fine Arts, and in 2010 gained a Post-Graduate Diploma of Fine Arts. Significant solo exhibitions include: Sapphic Fragments, Hocken Collections Uare Taoka o Hākena, Dunedin (2020);  Pocket Histories, Te Uru Waitakere Contemporary Gallery, Auckland (2018); Social Studies, the Dowse Art Museum, Lower Hutt (2019) and BODY LANGUAGE, Artspace, Auckland (2015). In 2019 Taylor was the recipient of the Frances Hodgkins Fellowship and in 2017 she was artist in residence at McCahon house.