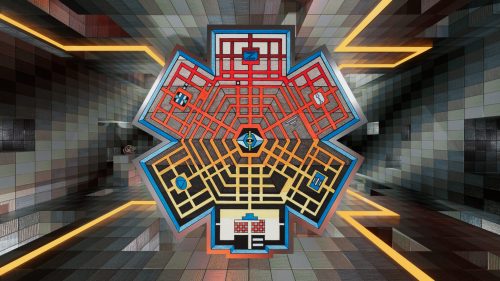 Jess Johnson and Simon Ward’s Terminus is an installation incorporating drawings, textiles (produced in collaboration with Cynthia Johnson), sculptural elements and a series of five immersive virtual reality experiences with a soundtrack by Andrew Clarke. The installation’s various areas correspond to the five “realms” within the virtual space, while white boxlike structures evoke the simple geometry of video game polygons. On the floor, a maze-like complex of coloured lines, interspersed with Johnson’s characteristically hallucinatory imagery, directs (and perhaps misleads) the viewer, creating the overarching sense of a cryptic, labyrinthine network. Immersed in this physical system of sensory overload, viewers are already being drawn into the position of explorers—or, perhaps, experimental subjects—before entering the virtual space.

At the core of the installation is the aforementioned simulated environment, accessed via virtual reality headsets placed throughout the gallery. Ward has used his video art and animation expertise to extend Johnson’s expansive, visionary drawing practice into a virtual experience divided into five “realms,” titled Fleshold Crossing, Known Unknown, Scumm Engine, Gog & Magog and Tumblewych. As these titles suggest, this work combines a wide range of eclectic influences to create its spectacular visuals. Drawing on imagery reminiscent of ‘60s psychedelia and experimental film, early ‘90s 3D rendering and contemporary video games, Terminus hurls the viewer through a series of impossible, alien territories. Part carnival ride and part vision quest, the work expands Johnson’s eerie techno-fantasies into an immersive world that hints at uncanny, endless depth and complexity. The virtual reality nature of the experience places the viewer inside the frame or screen, removing their status as an observer and imposing that of an inhabitant. Clarke’s audio further enhances this sense of immersion, providing a darkly atmospheric tone that builds to electronic crescendos as each experience progresses.

The virtual reality component of Terminus continues many of the motifs found elsewhere in Johnson’s work, such as anonymous, nude, clonelike figures, Escher-esque architecture, Op-Art- or psychedelia-influenced patterns and monstrous, biomorphic visages that straddle the lines between face, mask and monster. Figures walk, run, tumble and climb, subjects or competitors making their way through an esoteric series of gamelike stages alongside the viewer. The work subverts the adventure or journey scenario common to many video games, replacing the resolution or reward offered by the completion of a quest with an ever-deepening sense of mystery and alienation.

Johnson has a long-standing interest in the speculative potential of art, as evidenced by her work’s exploration of science fiction and technological imagery. By dissolving the boundaries between gallery and virtual spaces, Terminus asks the viewer to examine how engagement with simulated digital worlds reframes or warps their perception of the real. At a time when more and more of daily life is migrating online, works such as this are timely and necessary in their interrogation of how inhabiting such spaces shapes contemporary thought, perception and discourse.

Terminus was originally commissioned by the National Gallery of Australia and the Balnaves Foundation. It premiered at the NGA in May, 2018 and is being toured in New Zealand by Tauranga Art Gallery.