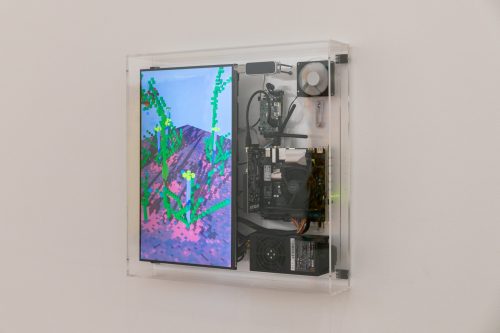 Machine in the Garden features Simon Ingram’s Automata Paintings and a series of new computer-based works by Terrestrial Assemblages, an ecological working group Ingram initiated alongside digital artist John-Paul Pochin to create sensitivity to, and awareness of, natural systems.

Both the Automata Paintings and the computer-based Tree Models share an interpretation of complexity as an emergent consequence of rule-based environments. Both series employ algorithmic self-organising systems called cellular automata, which were initially conceived of by mathematician John von Neumann as part of his research into machine self-replication and later developed by Konrad Zuse, John Conway, Christopher Langton and Stephen Wolfram.

In their simplest form, cellular automata exist as grids of cells in one of two binary states, decided relative to the position and state of neighbouring cells. These initially simple relational systems produce complexity that spreads across a potentially infinite theoretical space and can be used to demonstrate the outcomes of natural systems that have no “author,” such as movement in a school of fish or the “design” of termite nests.

For example, by executing his paintings in acrylics on gridded canvases according to elementary cellular automata rules, Ingram simultaneously participates in the history and traditions of abstract art while investigating systems that aspire to representation on a foundational level. These gridded compositions attempt to reflect the basic building blocks of biological systems, as opposed to the imitation of outward appearance that painting historically enacts.

In Ingram and Terrestrial Assemblages’ work, the artist initiates a process that continues on its own, leading to outcomes that emerge spontaneously. Each time the algorithms governing the works in this exhibition are run, they will generate structures that both look and behave differently, echoing the results of growth in the natural world. In works such as these, the artist removes their will and intentions from the work by a degree, becoming less an architect or planner of the final result than a gardener, planting seeds with the potential to delight and surprise.