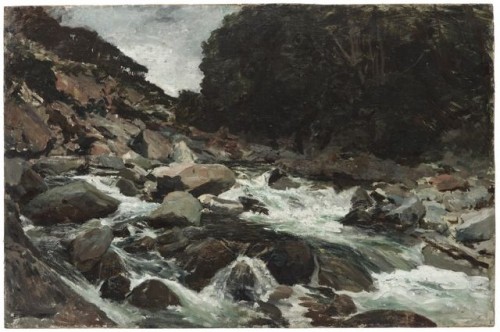 The Dutch artist, Petrus van der Velden, arrived in New Zealand in 1890. He was already a mature artist with an established reputation in Dutch art circles. Vincent van Gogh described him as a ‘solid, serious painter’ who he hoped to come into closer contact with.

Van der Velden soon found his muse in the landscape of Ōtira Gorge, deep in the Southern Alps. His paintings depicting this region have become iconic in New Zealand’s art history. He believed that studying nature could bring one into closer communication with God, and he sought ‘solitary places that still bear the impress of the Almighty Hand’. Ōtira Gorge offered such a setting, and there he painted ‘from morning until evening every day in spite of the cold and wind’.

Petrus van der Velden’s influence on other artists extended well into the 1900s. His symbolic use of light and dark was later picked up by celebrated modernist artist Colin McCahon.