Yoko Ono’s iconic Mend Piece (Andrea Rosen Gallery, New York City version) (1966/2015) is showing at Whangārei Art Museum this May. Bringing people together in an act of collective healing, this installation is akin to the Japanese concept Wabi-sabi, a mindset that embraces the flawed or imperfect. 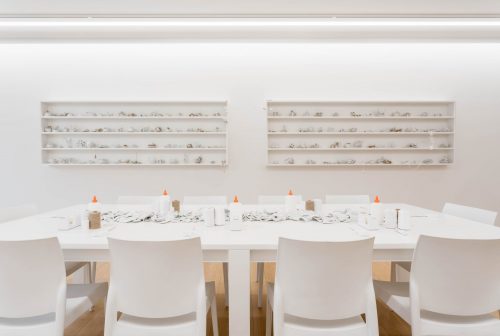 Presented with shattered cups and saucers, participants are asked to bind the fragments together using common household items: twine, glue, scissors, and tape. The resulting creations are displayed on nearby shelves, evidence of the power of collective action. On the installation wall, Ono’s words read:

Mend with wisdom
mend with love.
It will mend the earth
at the same time.

The work encourages participants to transform the fragments of broken china, which are both delicate and dangerous, into new objects. Mend Piece is closely tied to Ono’s beliefs: the contemplative or meditative act of mending is intended to lead to healing of oneself and one’s community, and, further, to healing wounds created by violence and hatred. With straightforward directions, the artist asks participants to let go of pretension and consider larger ideas.

Yoko Ono’s work radically questions the division between art and the everyday, the artist and the viewer. Participating in Mend Piece, one experiences Ono’s unique practice both intellectually and physically.

Yoko Ono (b. 1933, Tokyo, Japan) is a multi-media artist working in performance, instruction, film, installation, music, and writing. She was a forerunner and remains a groundbreaking force in conceptual art involving collaboration, audience participation, and social activism.

This exhibition is organized by the American Federation of Arts (AFA).