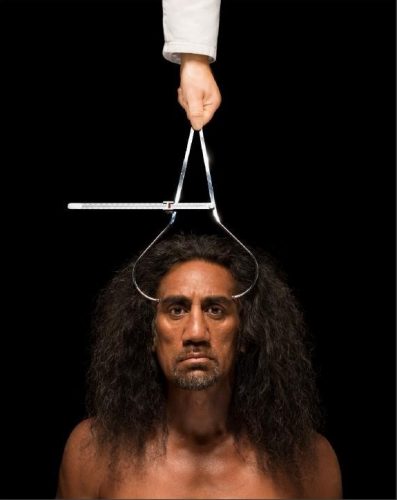 The new series, A Study of a Samoan Savage, is comprised of two broad themes – the histories of motion photography and anthropometry – explored together.
Presented in film noir cinematographic spirit, this powerful, allegorical series features a mythical character (Maui), a Polynesian demi-god performing a variety of movements, documented as ‘motion-photography.’

These movements explicitly reference rugby and the furore in April 2012 surrounding Pat Lam and the Blues rugby team, historical representations of Samoan men, Samoan cultural dances and the study of human movement through photography seen in the pioneering works of Muybridge and Marey.
The historical role of photography and the key role it played in establishing classifications in the study of race, gender, the human body, the science of movement and human evolution is everywhere evidenced in A Study of a Samoan Savage. Collectively, Samoan men were depicted as exotic savages, fetishized as a subject and as an object, colonised and treated as commodities.

Anthropologists used photography as a tool to establish a systematic process of collecting data and thereby propound various scientific theories, such as the existence of racial hierarchy, the enduring myth of Aryan superiority and Eugenics. However, those measuring systems and associated photographic techniques in turn became a primary means of subjugation.

Layers of symbolic meaning in Maui’s performances also draw upon the 19th century Samoan colonial experience of the human zoo, the ‘Volkerschau,’ popular then in Germany and Europe, a form of exotic entertainment and colonial theatre where Samoan men’s athleticism and prowess was presented as if in their primitive state. A giant man-made water slide featuring Samoan bodies ascending and descending it was also presented within the zoo.

The video work is all at once breath-taking, captivating and beguiling. It reveals multiple layers of narrative content, as well as numerous art, political and social dialogues with distinct developments from the critically acclaimed Siva in Motion (2012), in Kihara’s signature stylistic techniques: repetitive fragmentation, outline and overlay with a directness of gaze that – inevitably – elicits then seduces the viewer’s participation.

A native of Samoa, Yuki Kihara is an interdisciplinary artist whose work is characterised by investigations into memory, post/de/colonialism, temporality and aesthetics often exploring the experience of peoples in the Pacific region and their diaspora; and the varying relationships and intersections between gender, race, sexuality, culture and politics.